American high school students are officially fed up and want to be heard. Along with hundreds of supporters, survivors of the Parkland High School shooting are taking part in a peaceful walkout to get word out about #NeverAgain, a movement set to end school shootings and gun violence for good. This call to action resonated with the country at large, encouraging high schools from New Jersey to California to organize their own walkouts. Scheduled on the one-month anniversary of the shooting (March 14), they would take place for 17 minutes as a way to honor the memory of the 17 innocent lives lost in Parkland. The impact has been incredible. As of right now, there are over 2500 walkouts planned across the U.S.

Here’s the thing: Some high school leaders are threatening their students with disciplinary actions if they take part in these walkouts. If put into action, these actions could in theory tarnish a student’s permanent record and jeopardize their chances of getting into college (or even getting their existing offers rescinded). No matter what side of the gun-law debate you fall on, we can all agree that everyone should have the right to freedom of speech and peaceful protest.

Luckily, hundreds of schools are responding to these threats in the best way possible. Check out what some of our favorite colleges and universities have to say about these peaceful protests and freedom of speech. 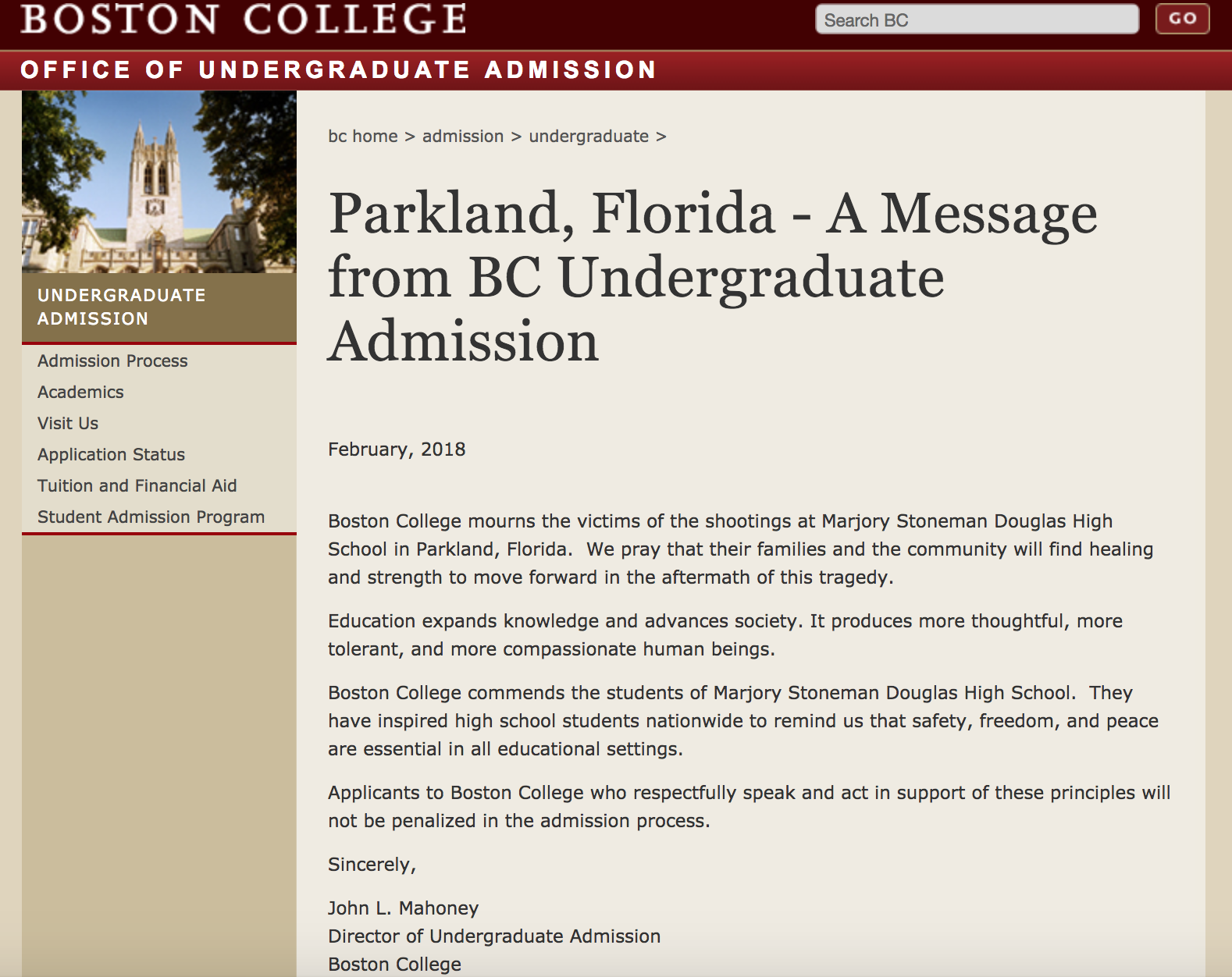 “Education expands knowledge and advances society. It produces more thoughtful, more tolerant, and more compassionate human beings. … Applicants to Boston College who respectfully speak and act in support of these principles will not be penalized in the admission process.” 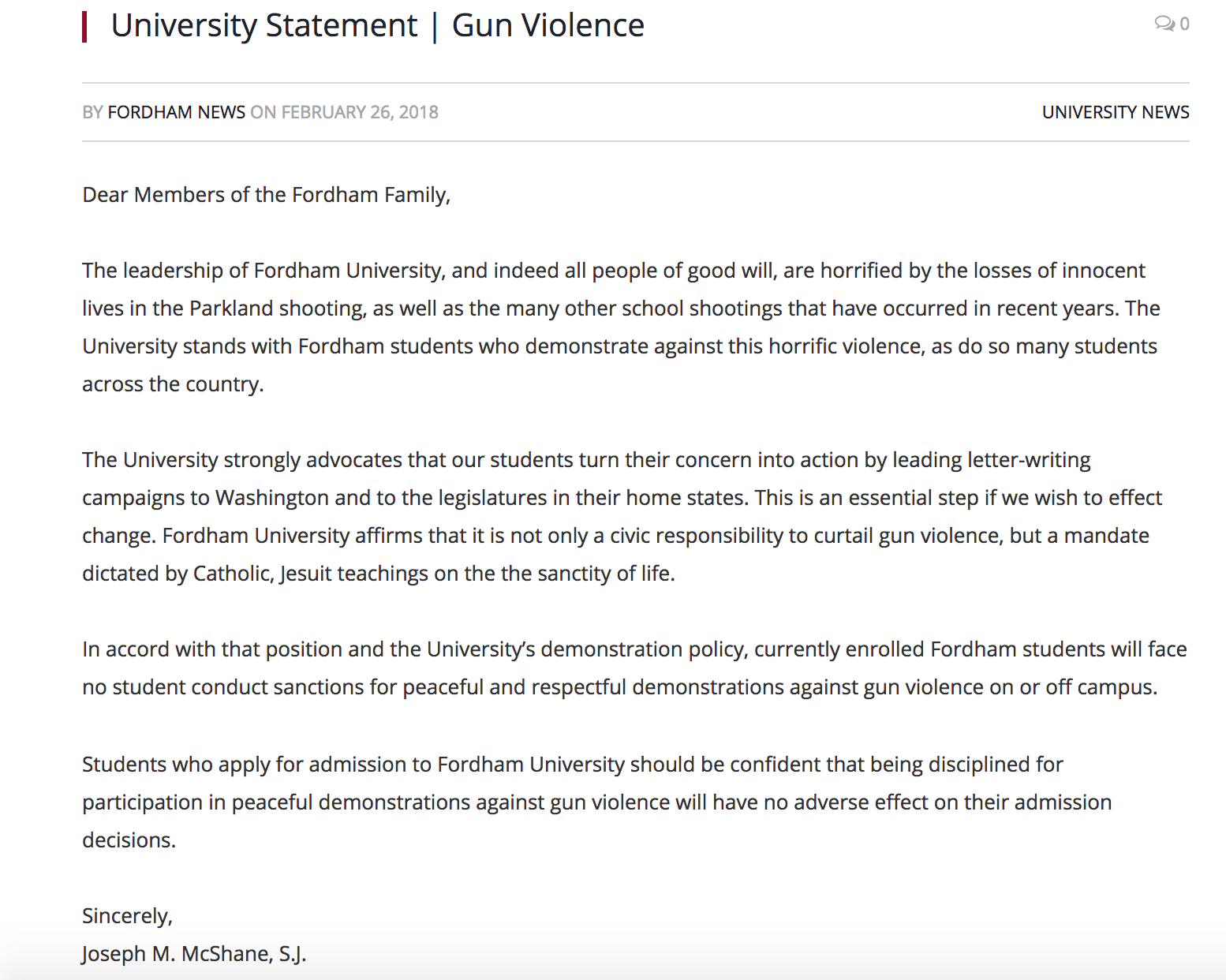 “The University stands with Fordham students who demonstrate against this horrific violence, as do so many students across the country.” 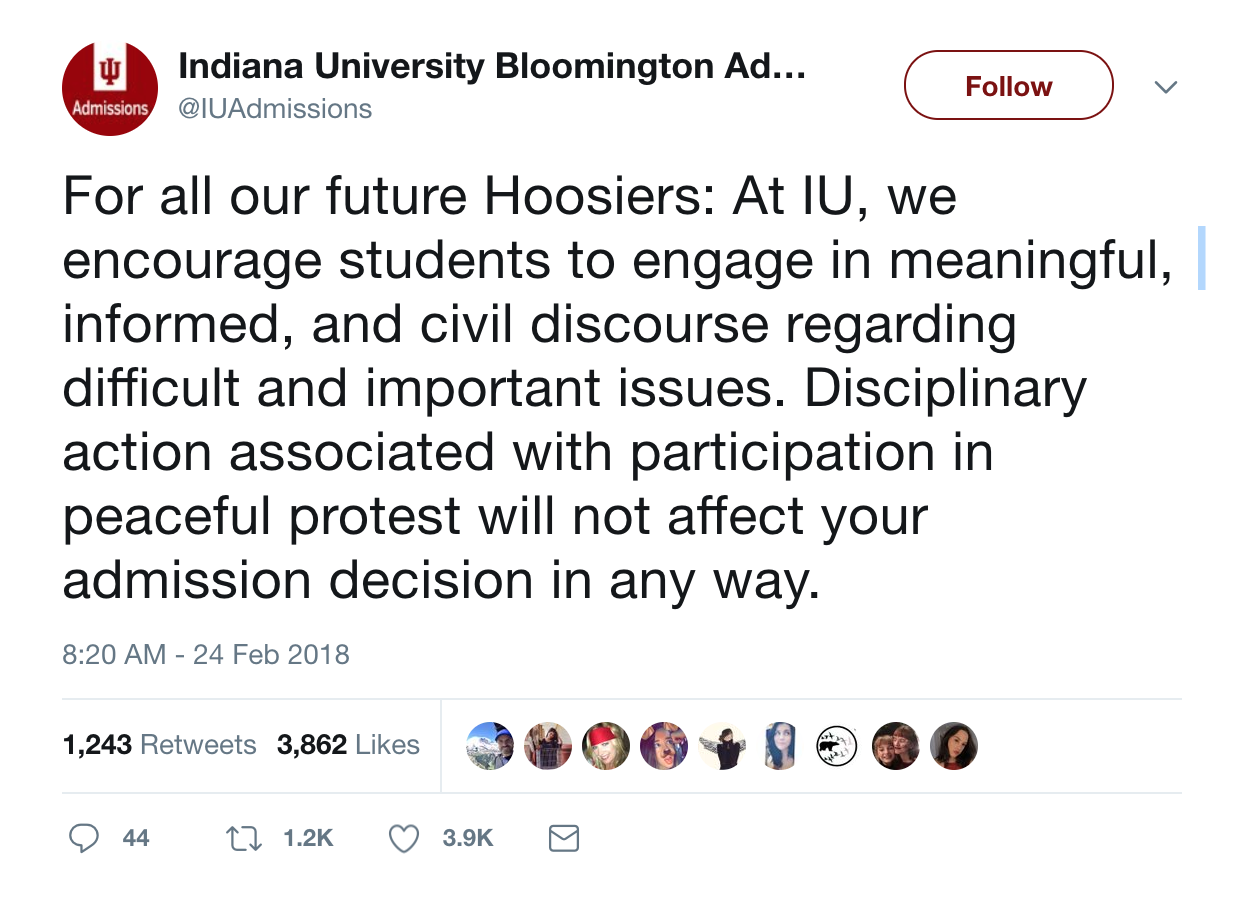 “At IU, we encourage students to engage in meaningful, informed, and civil discourse regarding difficult and important issues. Disciplinary action associated with participation in peaceful protest will not affect your admission decision in any way.” 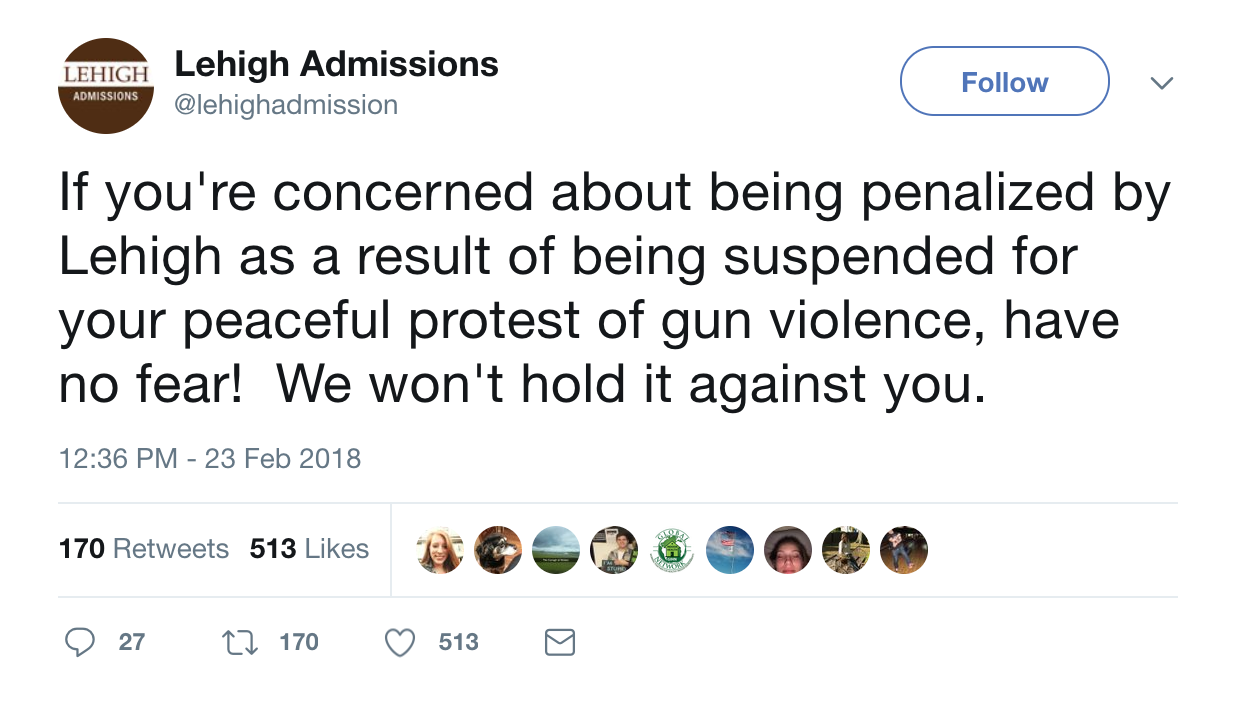 “If you’re concerned about being penalized by Lehigh as a result of being suspended for your peaceful protest of gun violence, have no fear! We won’t hold it against you.”

“A student receiving disciplinary action resulting from participating in such an activity would not be penalized in the admissions process at Montclair State.” 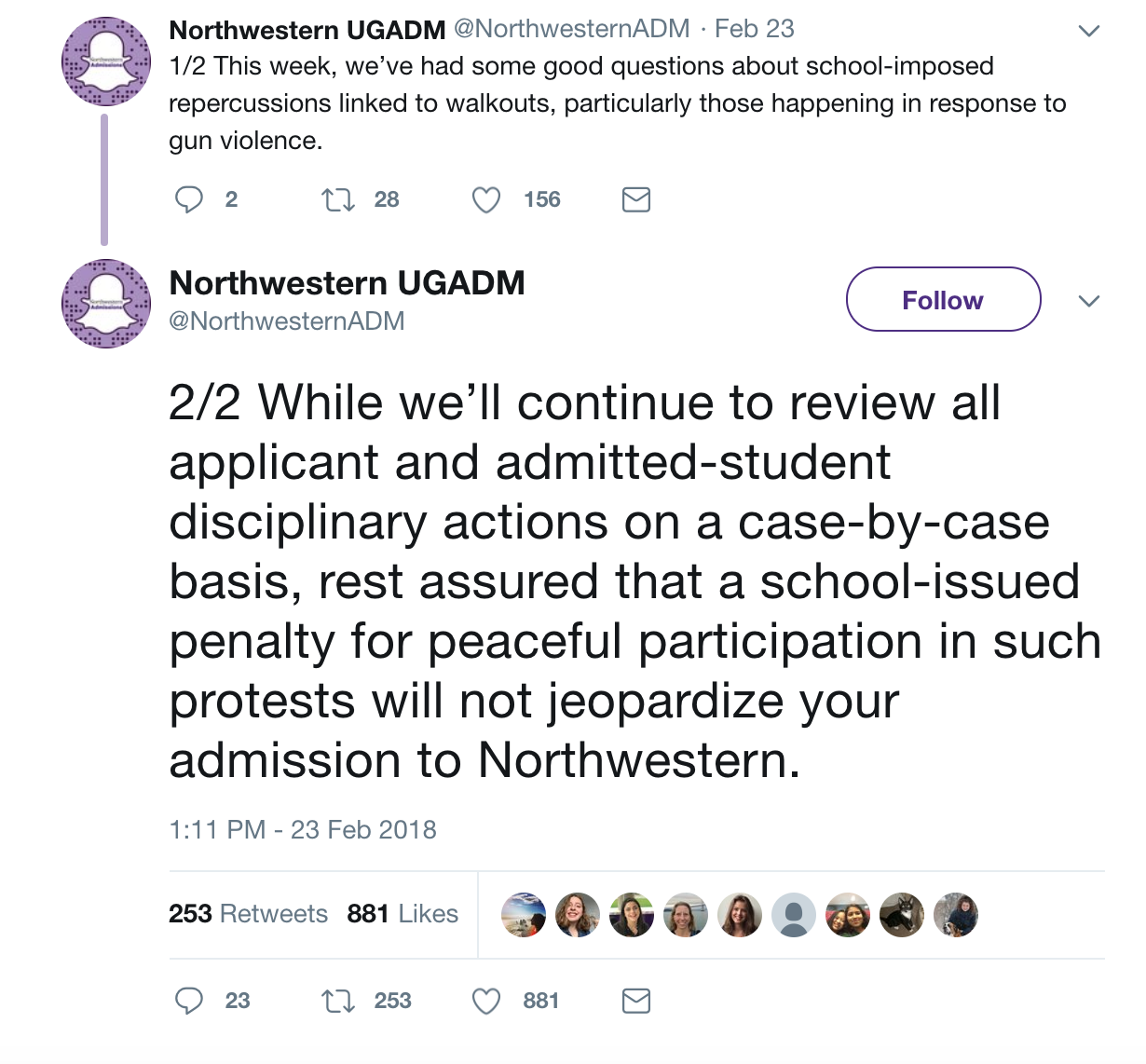 “This week, we’ve had some good questions about school-imposed repercussions linked to walkouts, particularly those happening in response to gun violence. … Rest assured that a school-issued penalty for peaceful participation in such protests will not jeopardize your admission to Northwestern.” 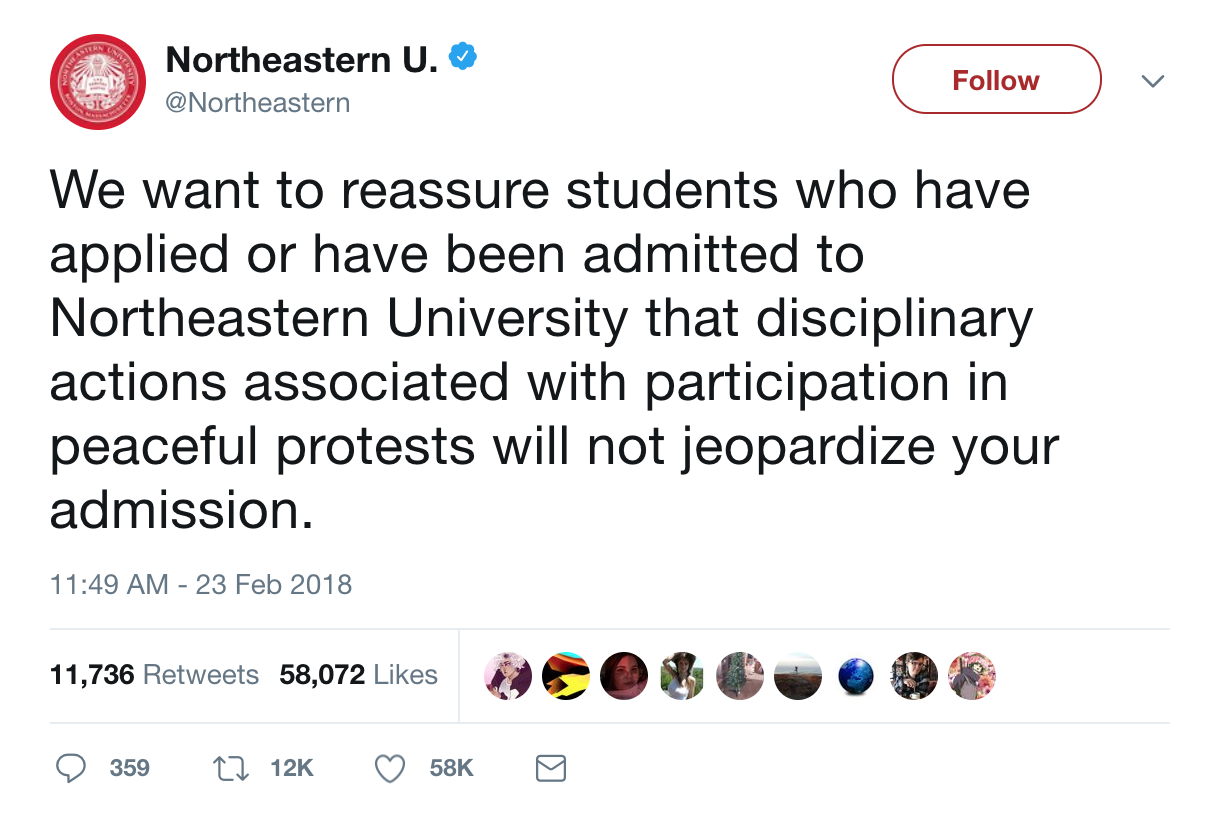 “We want to reassure students who have applied or have been admitted to Northeastern University that disciplinary actions associated with participation in peaceful protests will not jeopardize your admission.” 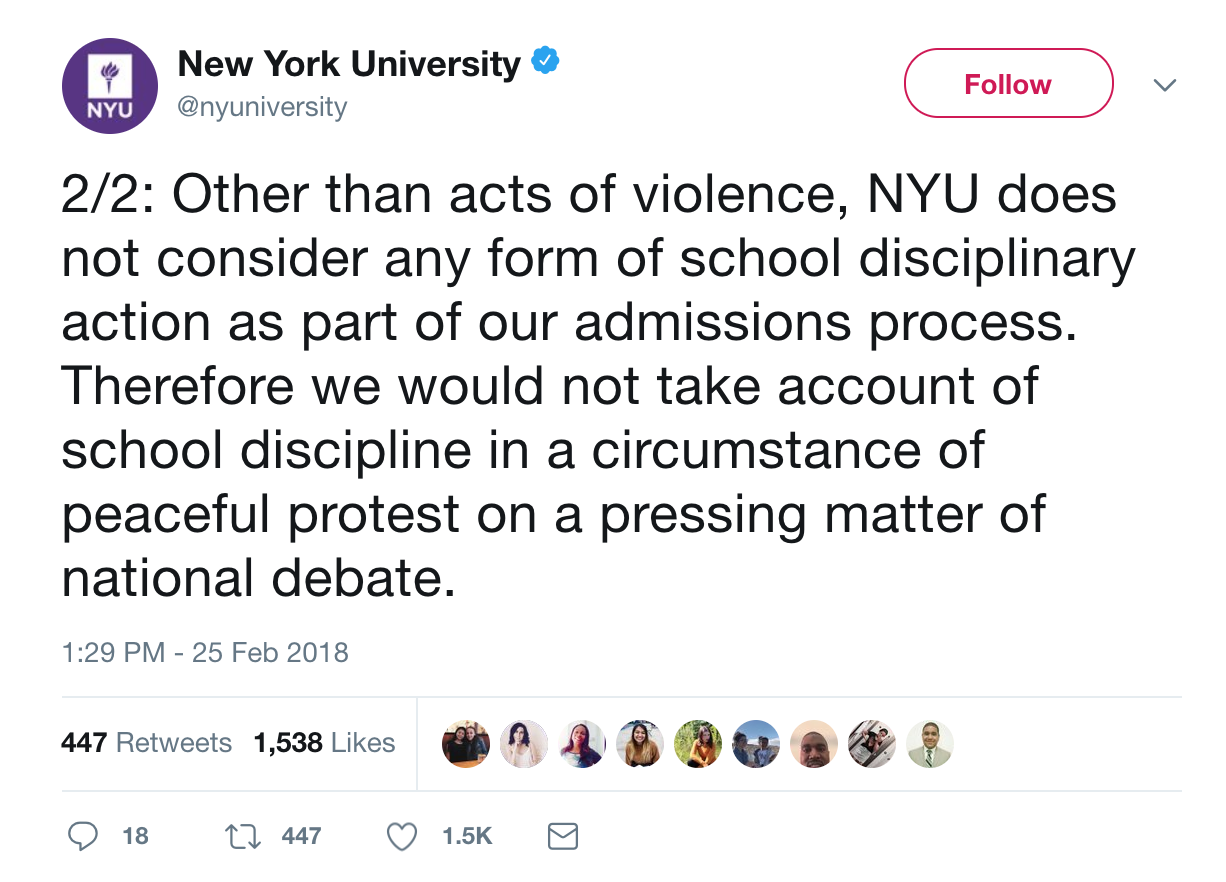 “NYU does not consider any form of school disciplinary action as part of our admissions process. Therefore we would not take account of school discipline in a circumstance of peaceful protest on a pressing matter of national debate.” 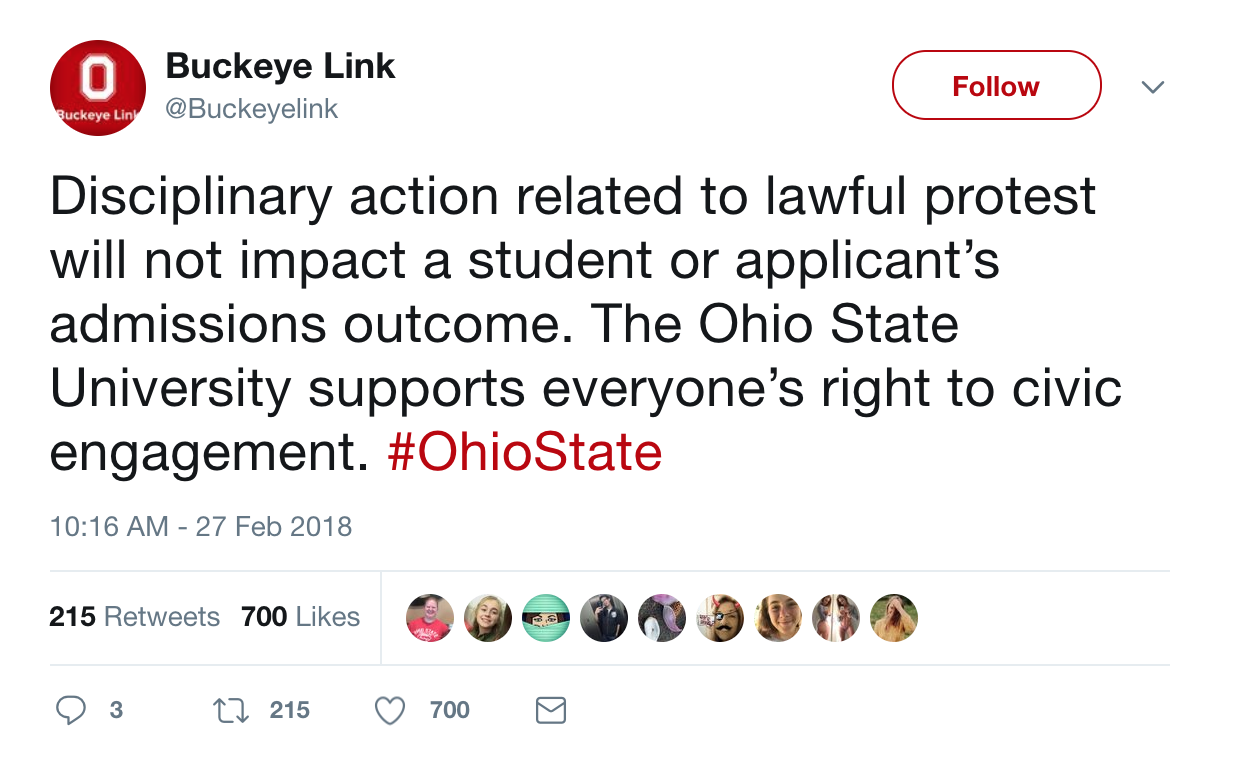 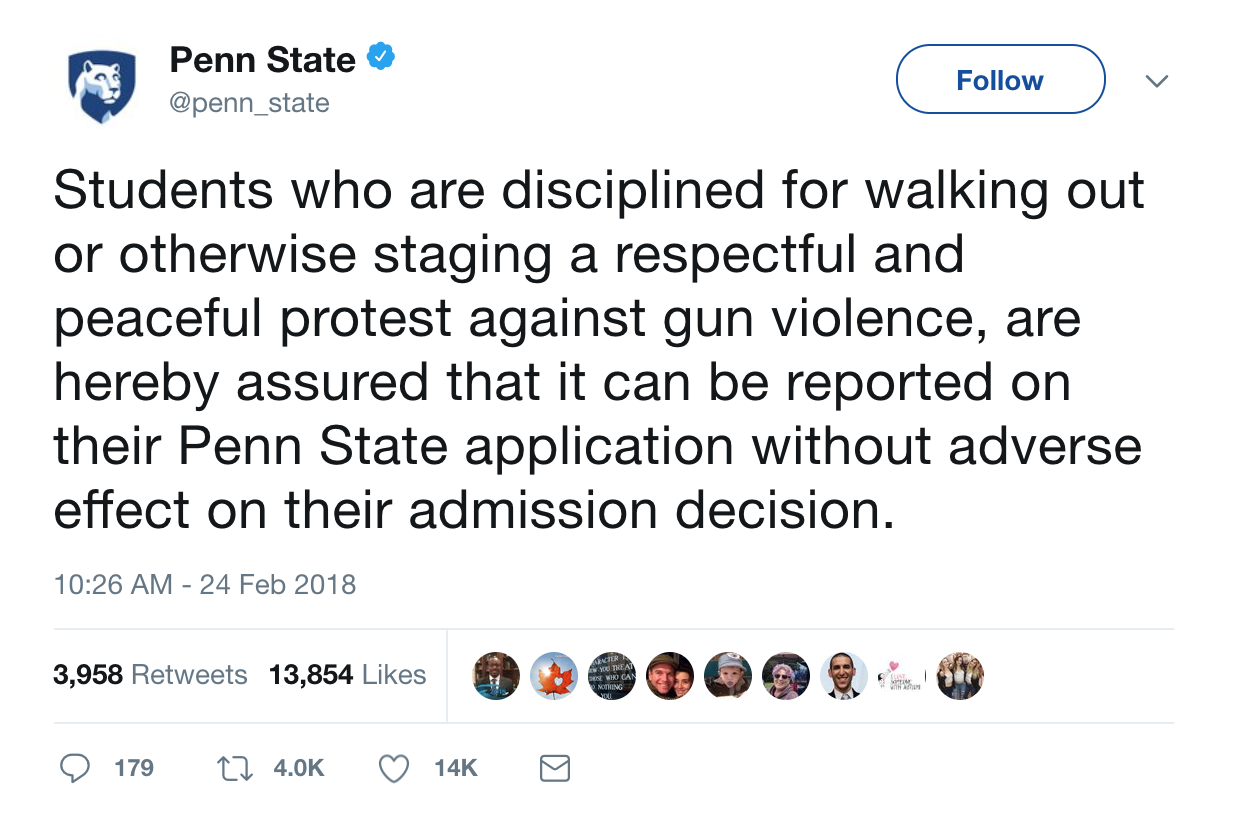 “Students who are disciplined for walking out or otherwise staging a respectful and peaceful protest against gun violence, are hereby assured that it can be reported on their Penn State application without adverse effect on their admission decision.” 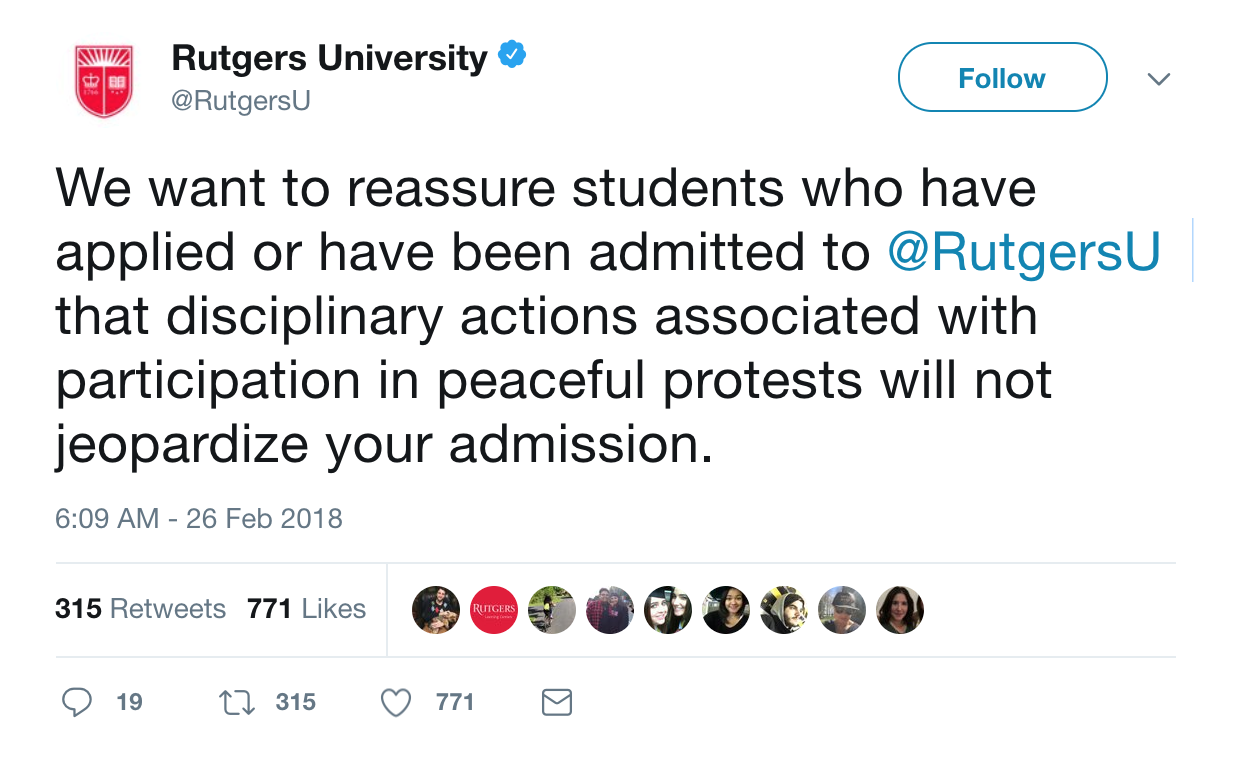 “We want to reassure students who have applied or have been admitted to @RutgersU that disciplinary actions associated with participation in peaceful protests will not jeopardize your admission.” 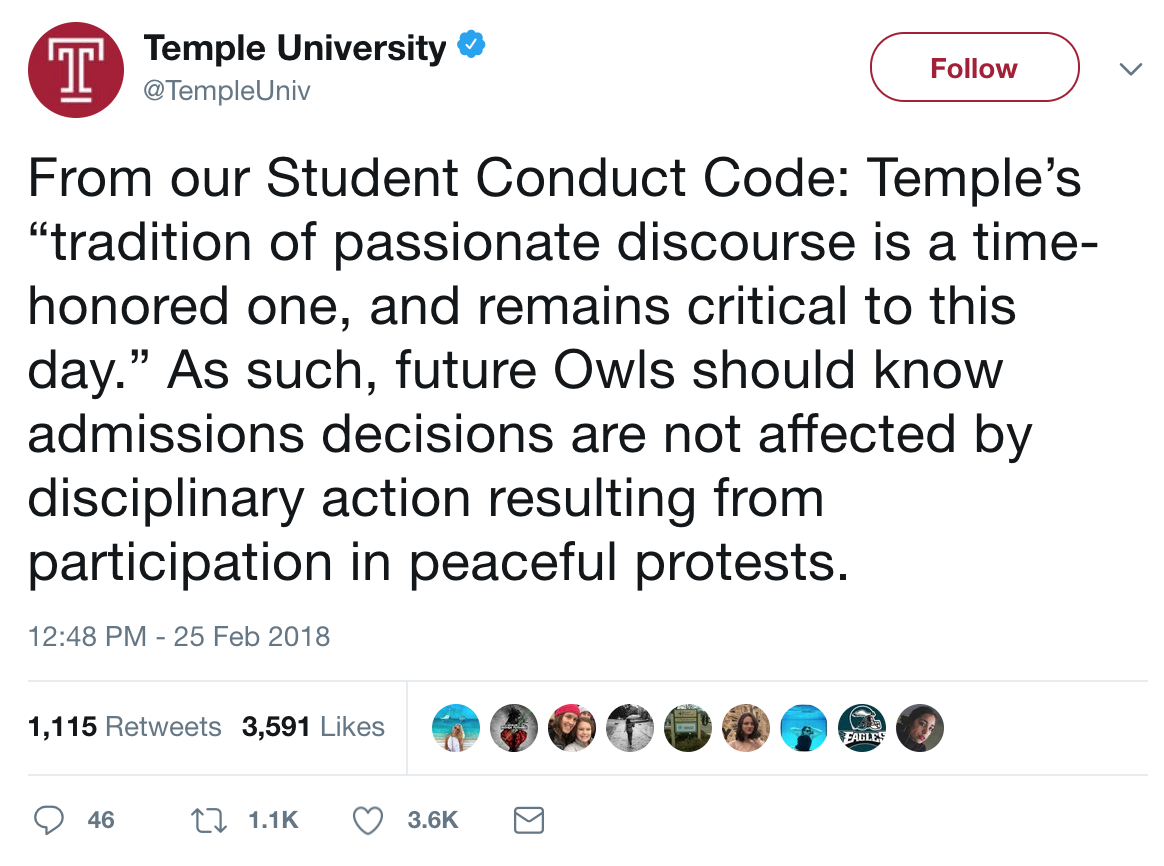 “Temple’s ‘tradition of passionate discourse is a time-honored one, and remains critical to this day.’ As such, future Owls should know admissions decisions are not affected by disciplinary action resulting from participation in peaceful protests.” 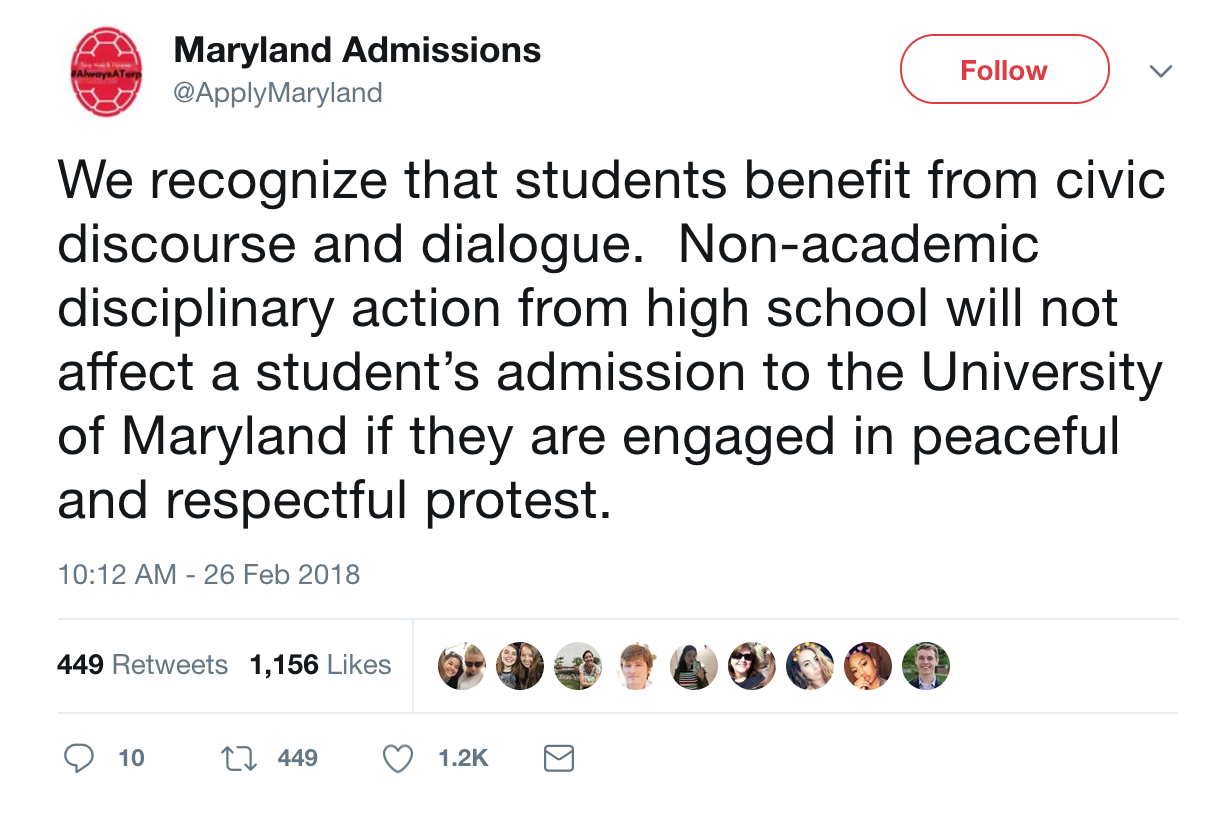 “We recognize that students benefit from civic discourse and dialogue. Non-academic disciplinary action from high school will not affect a student’s admission to the University of Maryland if they are engaged in peaceful and respectful protest.” 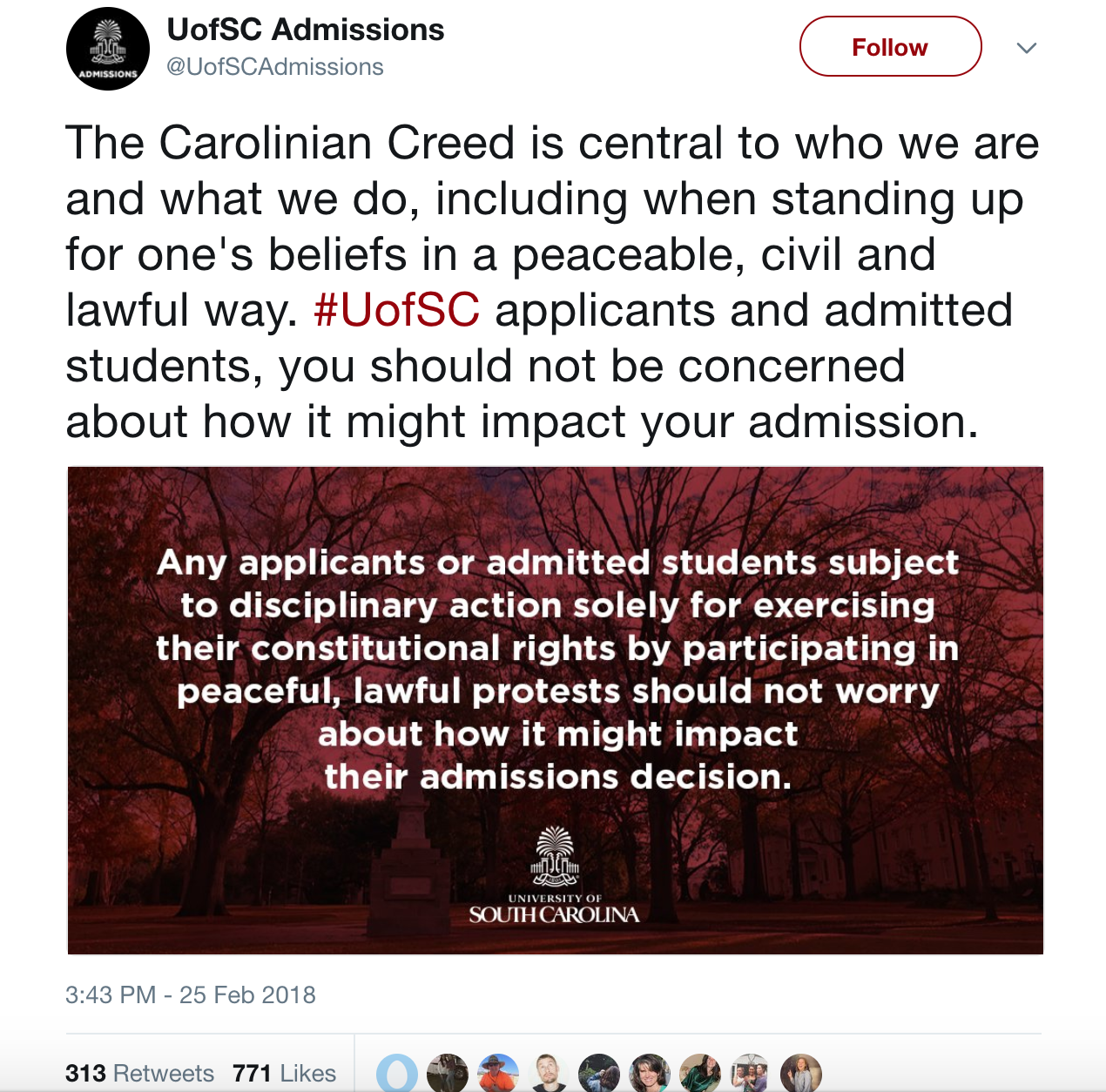 “The Carolinian Creed is central to who we are and what we do, including when standing up for one’s beliefs in a peaceable, civil and lawful way. … #UofSC applicants and admitted students, you should not be concerned about how it might impact your admission.” 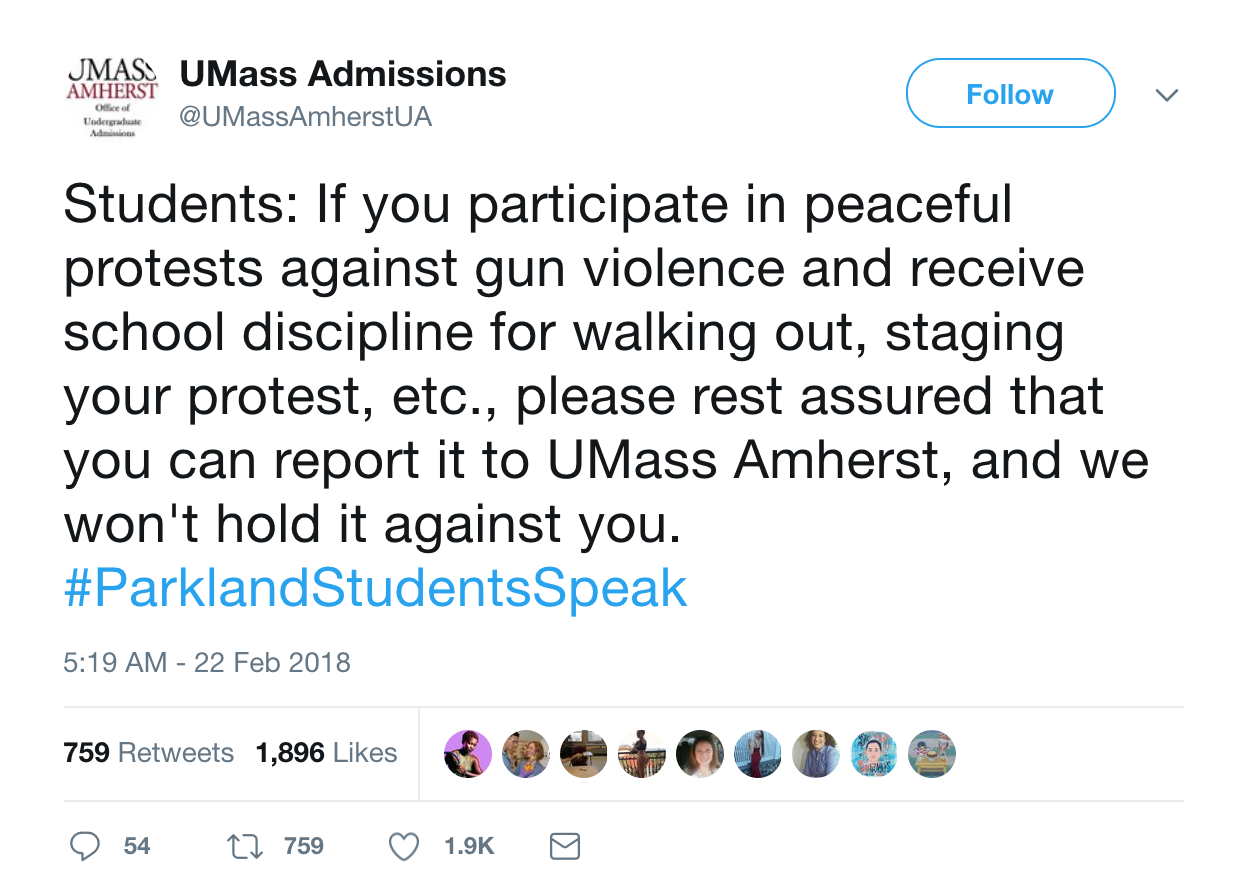 “If you participate in peaceful protests against gun violence and receive school discipline for walking out, staging your protest, etc., please rest assured that you can report it to UMass Amherst, and we won’t hold it against you.” 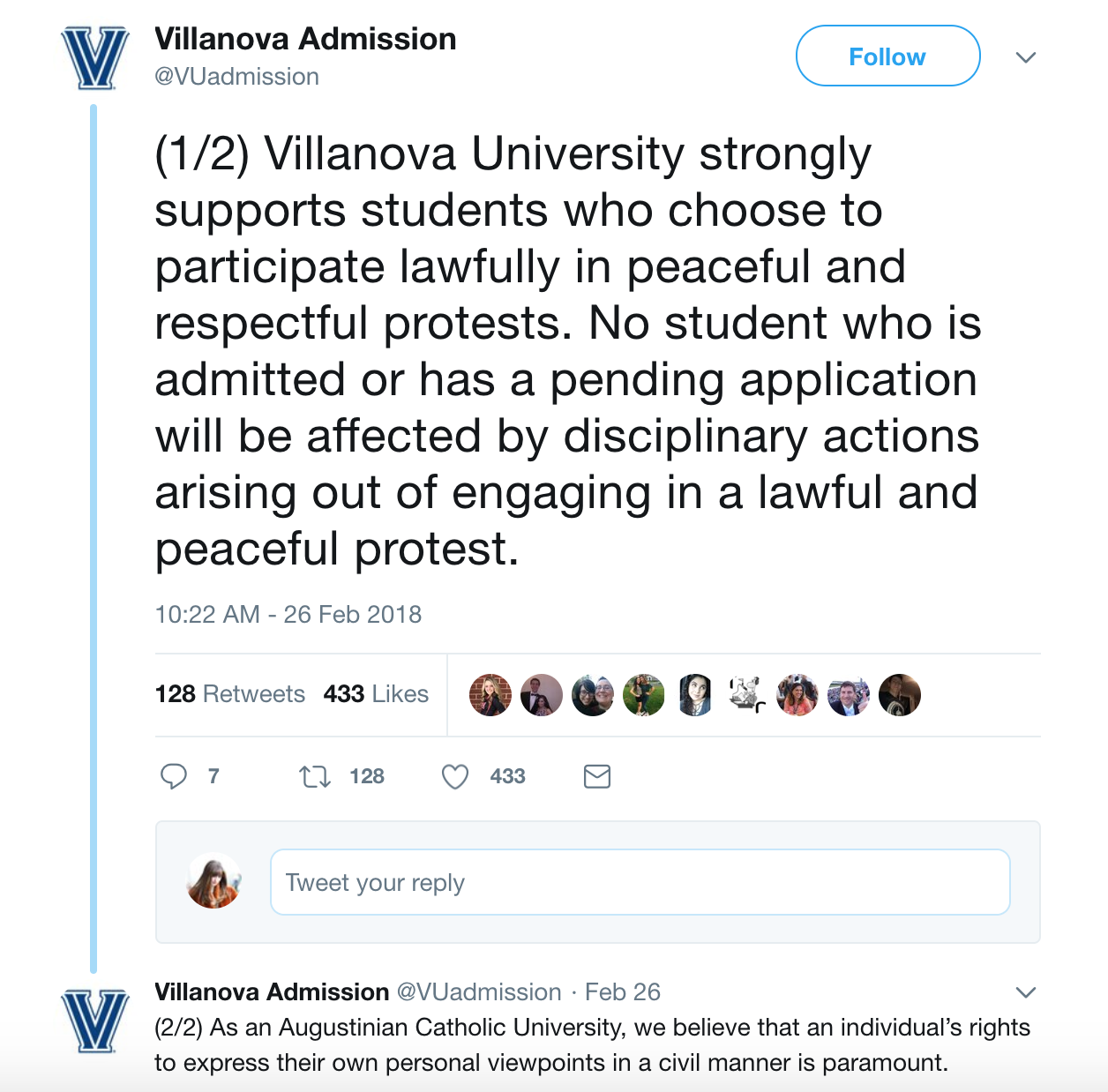 “No student who is admitted or has a pending application will be affected by disciplinary actions arising out of engaging in a lawful and peaceful protest. … We believe that an individual’s rights to express their own personal viewpoints in a civil manner is paramount.” 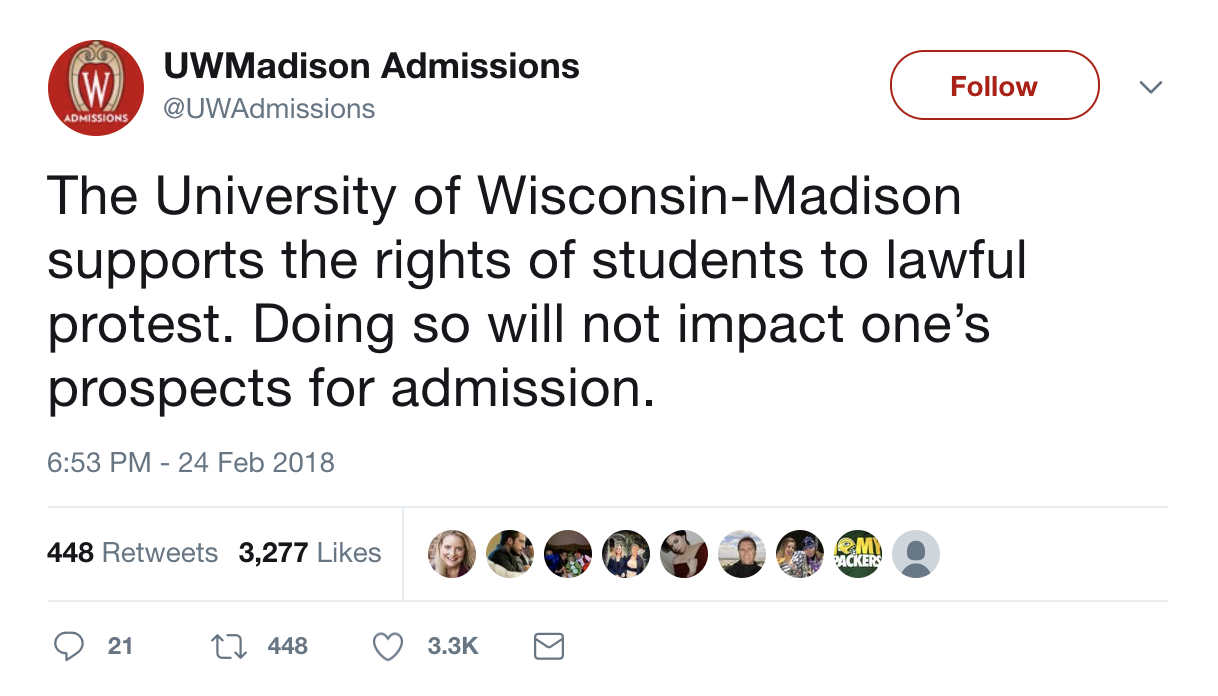 “The University of Wisconsin-Madison supports the rights of students to lawful protest. Doing so will not impact one’s prospects for admission.”

We want to know if your college is taking a stand. Share with us how you or you school is celebrating and protecting freedom of speech by commenting below or by tagging @cfashionista on social.